Until We're Each Someone Else

by STUCK OUT HERE 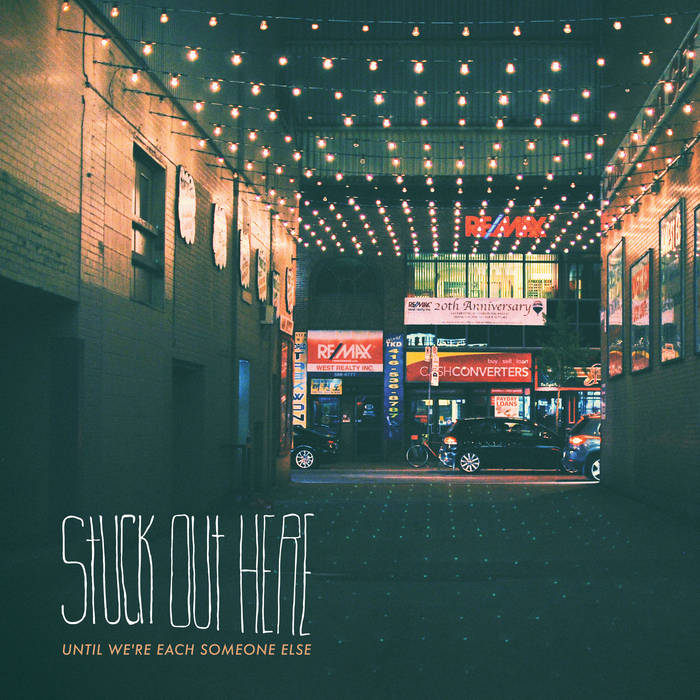 Until We’re Each Someone Else, the third release from Toronto-based indie-punk stalwarts Stuck Out Here, is a record occupied by the transience of identity and the shifting sense of self that blossoms as your twenties begin to enter the eternal rearview of your shitty post-modern life. Between songs that explore relationship malaise, prolonged adolescence, the romanticism of recklessness, and the collective cost on your mental and emotional equilibrium, the band navigate what could be tired terrain with abrasively self-lacerating abandon and a scrappy poet’s sense of literary ambition. If Getting Used to Feeling Like Shit, their 2014 release, dealt with their reluctant acceptance of adulthood, Until We’re Each Someone Else comes to terms with the people they have now become.

Co-frontmen and principal songwriters Cam Laurie and Ivan Raczycki bring their writerly instincts to eleven songs informed by regret, remorse, lethargy, and loss. With the help of bassist Emmett O’Reilly and drummer Pat Armstrong, the band create stirring, anthemic, pop-imbued rock and roll resilience. Is it a sad record? Almost brutally so, but goddammit, it’s not defeatist. In “Hangover Sex”, Laurie promises salvation for his burgeoning young love (“one day I’ll take you away from this / one day we won’t be so helpless”), wherein “Embarrass You”, Raczycki repeatedly apologizes for his brutish buffoonery and admits, “I want to change.” They’re fucking up, but unlike previous releases, they’re finally holding themselves accountable.

It’s because in the process of crafting this album, a lot of changes have happened to the band. They’ve all left school, maintained and exited long-term relationships, and attempted to enter the so-called professional world, all while holding a candle for their silly beloved punk rock enterprise. The most severe change, however, came in 2014. After releasing Getting Used to Feeling Like Shit and during its ensuing tour cycle, Raczycki experienced his first hypomanic episode, resulting in multiple hospitalizations, extended periods of psychosis, and a diagnosis of bipolar 1 disorder. During his recovery, the band soldiered on, and came together with a fresh batch of songs put to tape with longtime producer Siegfried Meier in the summer of 2016. That fall, Raczycki’s illness returned.

“Saint and Sinners Wine” tackles his episodes head-on, centering around a relationship Raczycki maintained while manic. The lyrics are laid bare. “I thought you were an angel I could talk to in the shower / covering myself in soap under the hospital’s cameras” he sings, as the band kicks in to help him scream “I thought I was God / I really thought I was God.” Elsewhere, on “Sweet Fade”, Raczycki deals with the resulting extended period of depression that accompanies a manic episode. “I’ve been sinking into nothing / and it feels okay / I’ve been learning how to love fading away.”

These are heavy revelations on their own, and as counterpoint, Laurie doesn’t slouch. Throughout the record, Laurie explores the expectations and ennui of romantic entanglement with dire emotional frankness, whether it’s the fatalist resolve in “Never Should’ve Bothered” (“If you knew what I knew when it started / It never would’ve started”), the doomed love portrayed in “Bore Me” (“You say hold on/I ask for how long?”), or the rallying cry of “nothing lasts / everything lingers” in triumphant album closer “Robin Tunney”.

Together, Laurie and Raczycki make impassioned rock raconteurs, their tales vividly and emphatically actualized by O’Reilly’s burning harmonies and Armstrong’s fervent drum histrionics. Musically, the record exists somewhere amongst the pantheon of modern pop-punk classics like Joyce Manor’s Never Hungover Again, Japandroids’ Celebration Rock, and The Menzingers’ On the Impossible Past, with the creeping influence and affectations of a young Conor Oberst or Paul Westerberg.

Until We’re Each Someone Else is the perfect salve for listeners looking for emotional integrity and euphoric catharsis, an album of unrelenting truth and obstreperous beauty. See you in the pit, shaking and crying

Bandcamp Daily  your guide to the world of Bandcamp